Okay, guys, time to hopefully pick some brains for help here (that sounds really nasty, but I’m hoping you know what I mean). So for the past few months my hair has changed from soft and a little crazy to a nasty grease ball on top of my head. The roots and scalp are disgustingly greasy. It’s not cool. I’ve tried quite a few different shampoos to clear it (Aussie’s Cleanse and Mend, Nexxus Gentle Clarifying, and some other drugstore brand that I can’t even remeber the name of), and the only one that has slightly worked is Aussie Cleanse and Mend. However even that one doesn’t work great, by the afternoon, I’m back to grease ball status. It’s annoying, it looks like I don’t take care of myself, and if I don’t wash my hair every night, it’s even worse. I color my hair, but I’ve done that for nearly two years. I stopped using all other styling products and only use a small amount conditioner on the ends of my hair, seeing as it really only happens on my scalp and roots. I’m looking to use Frederick Fekkai’s Apple Cider Clarifying Shampoo, but just wondering, in case anyone knows, how does that work with colored hair if used every day? Does it strip the color from the hair, or only slightly dull it (that’s okay, the color can be a little too intese at first)? If anyone out there knows, or has a better suggestion, help!

Update: Figured the problem out… I have way too much hair… do the “rinse, lather, repeat” thing three or so times, and I’ve got my clean hair back… I need a haircut. And boy am I glad I didn’t by the 8oz. bottle of $23 shampoo from Frederick Fekkai. That would put a huge dent in my money, and I need that for the room redecoration project I’m on now. And thanks for the suggestion, Sprocket.

So how many of the readers out there used to have a subscription to Domino Magazine? How many would pick it up on the newstand when they could find it? How may have felt a void, a hole, an empty spot, since Conde Nast brought Domino to the chopping block? Have wondered where they will ever find something like Domino again? Well, I think I found something. Okay. Domino was a great Shelter Magazine from 2005 to 2009 published by Conde Nast. I have been stalking copies of it on eBay from the moment it folded, since I only started subscribing to the magazine in 2007. It had some great stuff in it, and unlike some other shelter mags (such as Metropolitan Home, which I do like to flip through. My uncle used to get sent that magazine because of his contracting work, and he wouldn’t ever read it, but he did give them to me.) it features many things that you could actually afford from places like Target or Pottery Barn or West Elm, not “oh I like that rug. But I think I’ll have to win the lottery to get one like it… nevermind.” It was “oh I like that rug. Hey cool, you can get it at Target! Sweet!” and you have a new rug. And then it folded thanks to the depressing recession. They did get one book out, Domino Book of Decorating, which I own and will use when I am decorating my first place not known as a dorm room. And then it will go on my coffee table. Here’s the book:

And that’s actual Degournay wallpaper on the cover… if anyone knows where I could find a swatch… yeah, I like that wallpaper. And I’m more of a paint the wall kinda girl.

And while I’m glad to have my copies of the magazine and the book, I miss getting a new Domino every month and looking through it. I probably would have used them to decorate many different places in any home I was in. But it’s been gone. And I’ve been searching for a replacement. And ladies and gentlemen, after a year of searching, scouring, and buying other shelter mags that just depressed me, I have an important announcement! I think I have found one to fill the void. No, it’s not Domino. But it’s made by some former Domino Staffers. It’s a web published magazine called lonny (http://lonnymag.com). I think it’s filling the void. Just thought I would share in case any of the other Domino lovers out there are still trying to find something like Domino, or are reading other magazines and feeling depressed. It’s great!

Oh, and if you ever want to be a person I will think is awesome forever and ever without, send me old issues of Domino, and you will have awesome status forever. Trust me on that one.

And by the way, I totally want this Ikea pendant from this month’s lonny: http://www.ikea.com/us/en/catalog/products/90147465. It’s awesome.

And I’m sure others have heard of this already. Somehow I just didn’t find it until now. I’m just fantastically quick like that.

Not trying to steal images, I just can’t always get good ones. I always give credit.

So I’m manning my department’s front desk for the next few weeks, while the rest of the office is down in Atlanta for a big conference. Which means I take messages. Guy calls up, we’ll call him Barry, for privacy’s sake I won’t say the real name. When he called, I was doing a tour (yeah, my department at work does tours, and I get the joy of doing that while they’re all away. I had a big tour of 80 people the other day, but that’s a whole different story.) So Barry leaves his message, and throughout the whole thing he’s talking. at. this. pace. Maybe even slower. Through the whole thing… until he gets to leaving his phone number. Then he startstalkingatthispace. Probably faster. “If. you. could. give. me. a. call. my. number. is. 12345354623.” Barry, I have one request for you and all the other Barrys out there. Please, give the number at a pace that people like me who don’t write super fast can still manage to get the number down on the first try and not have to re-listen to the message fifty times. I don’t got time for that dude! Okay, <end rant>

That long awaited Glee post is coming soon, I promise!

* – Names have been changed.

Just been a little sad since Thursday. My little cat Coco had to be put down. Thanks for the seven years of being a wonderfully sweet kitty, even when you would nag for food. It’s sad she had to be put down, but she was starving from not being able to gain anything from the food, skinny as anything, and sick. I hate saying she’s better off, but she’s not in pain now. We all miss you Coco. Chanel does too. And wants to know why all of her food is still in her bowl after a whole day. Rest in peace baby. 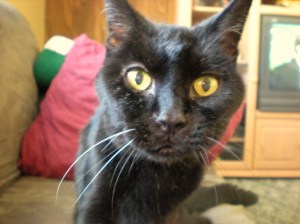 So Memorial Day we went out to the mall for a bit. And we all know that I loooove shoes, right? Remember this post? I succumbed to my weakness again Monday. I was in Bakers (one of the best shoe stores in Columbia Mall), and looking for a replacement for my yellow shoes. Quick sidestory: last January I was in Off Broadway Shoes and found a perfect pair of spring pumps from JS by Jessica. The were slim heeled, round toed pumps with pretty yellow flowers all over them. The main part of the shoe was cloth, and they were perfect. So they came home with me, and went to school with me. And after a month or so of wearing them about once a week (I lived in a dorm, I had limited wardrobe options), I noticed that the right shoe was starting to get a split in the side. See: 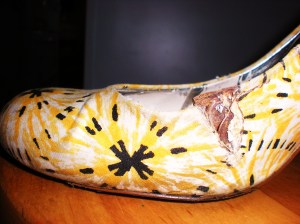 And then a month later I was walking to church with a friend, and the tap on the bottom of the heel popped off out of nowhere. I take care of my shoes. I love them, keep them in the right manner and all that, and don’t cause too much wear to most pairs of shoes. And they last me a long time because of that. Needless to say, I was quite ticked off that this happened. And I didn’t know where a good shoe repair place was nearby. The little plaza shopping center on campus didn’t have a shoe repair, although I still think they should, even though I don’t live there anymore. So for the last month and a half of school, I couldn’t wear my lovely spring shoes because of the damage that came about. Yeah, I’m never buying JS by Jessica shoes again. They suck. Jessica Simpson shoes are okay. My mom has a pair that have lasted a few years. But the JS ones… never again. The JS shoes kind of suck, Ms. Simpson. Sorry. Don’t hate you, just the shoes. I took them home at the end of the school year, and brought them to the shoe repair up here that I know and trust, and they were able to patch the split in my shoe, and reheel them. Until recently, they’ve been fine. But recently the split has been worsening and the left shoe is now getting a split. Time to replace. Which is what happened Monday. Okay, back to the main topic now. I see these beautiful yellow platform sandals on display, ask an employee to please get these for me in size 10 (yes, I know my feet are freakin’ huge. Thanks.), and try them on. And oh my, they’re meant for me. And then I see the style name on the box, Katy. Yeah, I spell my name Kati, but hey, it’s fate anyways. They must be mine. And they’re so beautiful! 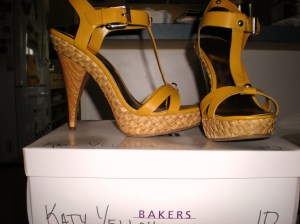 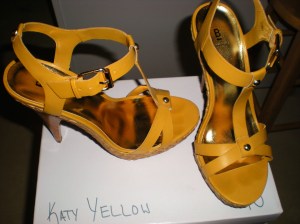 And the best part was that yesterday while I was at home all day, I walked around in them basically all day long, and I had no pain. I. Love. These. Shoes. They’re a 5 1/8 inch heel with a 1 1/4 inch platform, so basically I tower. Now to just not trip when I walk. My normal heels are at 4 1/2 inches at the highest, and I walk okay in them. I’m doing okay in the 5 1/8’s most of the time, but every once in a while, there I go, eating floor. Which really, I should be used to. But man I love these heels. My legs look fantastic. Now to find some closed toed yellow heels, my replacing the JS split shoes will be finished.